Stocks May Be The Least Of Our Worries

December 23, 2011, 3PM - I looked out my car window and took this photo of the sky over Charlotte, NC. It is 66 degrees outside. Aircraft activity has been extremely heavy, extremely high, and extremely fast over the past few weeks. I am no expert but I read a lot. I also share with the framers of the US Constitution a healthy distrust of government. But please look at this photo very carefully. Then read on below. 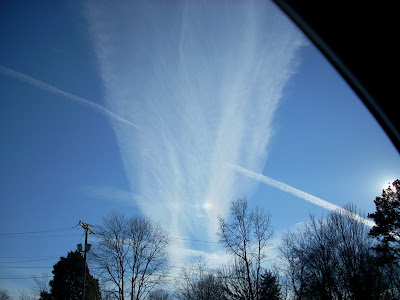 12/23/2011 - Photo copyright by Barry Ferguson
Don’t worry about stocks. The central banks have them totally under control. First, they had to get rid of the small investors. They did that by manipulating the stock indices and turning them on a dime such that the little guy always suffered loses. He’s out, he’s broke, and he’s disgusted with the whole thing. With a smaller group of players, the central banks have less to deal with as they continue to push stocks higher. While we are all giddy with stock gains, let’s examine the cost of those gains as 2011 ends.
Stocks should be the least of our worries. Commandant Obama partnered with the 93 traitors in Congress to eliminate the Fifth Amendment from our former rule of law known as the US Constitution. The National Defense Authorization Bill does just that. The Fifth Amendment restrains the government from exercising totalitarian authority over the common man. This part of the Constitution says a person can’t be compelled to ‘witness against himself, nor be deprived of life, liberty, or property, without due process of law; nor shall private property be taken for public use, without just compensation’. Mr. Obama and his treasonous Congress apparently beg to differ with only 7 members dissenting including the esteemed Mr. Ron Paul. Now, it appears that the US government can march our ‘heroes’ down our streets, arrest us, detain us, move us anywhere in the world, hold us forever, and deny us access to legal counsel if they so much as suspect us of doing something they don’t like. This has to be one of the saddest periods in the history of the republic. We, the people, are now simply we the subjects of autocratic ruling elites. The government was supposed to have the consent of the people. Now it deserves nothing more than the contempt of the people!!
Again, stocks should be the least of our worries. Please review again the photo above. This would appear to be a classic ‘chemtrail’ in the sky spewed by our military ‘heroes’. Yes, they are all promoted to ‘hero’ status so we don’t question their activities. Contrails of course are normal exhaust trails that condensate and then quickly evaporate in the atmosphere. Chemtrails are laced with chemicals and most observers believe these chemicals to be heavy metals. Specifically, barium. Heavy metals enter the human body through air, food, and water. Humans are affected with alzheimer-like symptoms. Tiredness, confusion, reduced mental acuity. Chemtrails linger for hours and slowly disburse leaving the illusion of a low cumulous cloud. Often they have a pinkish hue and emit a rainbow effect. In the photo, we can see a faint prism just above the tree line. This is hard for amateurs to photograph but their was definitely a color prism in the clouds that I photographed. What is our government really up to? Maybe they want to dumb us up a bit more before they march the tanks down the street. Look what is happening in Europe.
ECB President Draghi has repeatedly said in the past few months that the ECB did not have the legal right to loan governments money. Further, the ECB only had a single mandate of controlling inflation. Bank bailouts were not permitted. Suddenly, that has all changed as the ECB just elected to inject $640 billion into their own version of quantitative easing European style. The ECB is going to lend the banks of Europe $640 billion at 1% interest for three years in hopes that the banks will buy debt of insolvent sovereign nations. Nevermind that this development has nothing to do with the single mandate of controlling inflation through a stable currency. Nevermind that this development is a repeat of the US central bank strategy of bank bailouts forever. What is the real goal? At the end of three years, the banks will still be holding debt that cannot be repaid and the ECB will have even more control of Europe. Just like the Federal Reserve took control of the US, the ECB is slowly taking control of Europe.
Now, would people that conspire to gain this much control hesitate for one moment to spray us like we were mosquitoes? We all have more to worry about than just stocks. All I want for Christmas is a chemical mask. Merry Christmas anyway!!
Disclaimer: The views discussed in this article are solely the opinion of the writer and have been presented for educational purposes. They are not meant to serve as individual investment advice and should not be taken as such. This is not a solicitation to buy or sell anything. Readers should consult their registered financial representative to determine the suitability of any investment strategies undertaken or implemented. BMF Investments, Inc. assumes no liability nor credit for any actions taken based on this article. Advisory services offered through BMF Investments, Inc.