I have been writing about copper. I have been studying the price of copper. Everyone knows that copper has been a barometer of the world economy for many years. Why? Almost everything we use involves copper. Modern electronics contain copper. The telecommunications universe uses copper liberally. Houses and buildings of all kinds are networked with copper. Ships, planes, and automobiles use copper. Even our bodies and other living organisms need a small amount of copper. When we humans consume, we use copper. The more we consume, the more copper we use. And so, we can infer that copper and the economy are linked together.

It makes sense, then, that the price of copper and the stock indices should be positively correlated. The chart below shows this relationship very well. The chart shows the price of copper (US dollars) in gold as it relates to the Dow Jones Industrials (blue line) over the last eight years on a monthly basis. True enough, copper and the Dow have moved in tandem over this time period until recently. Now, something different is happening. Copper prices have actually been falling since mid-2011 while the Dow has of course been rising. In 2013, copper and the Dow inversely correlated one another in that the Dow rose and copper fell. To be both up to date and accurate, 2014 has witnessed a return to correlation so far. In January they both fell and through late February, they have both been rising.

Copper has become very curious to most observers. To those who believe in a true global economic recovery, falling copper prices present a conundrum. The economy is growing, stock prices are ascending, and copper is declining. To those who understand that the economic recovery is voodoo conjured by central banker intervention and stimulus, declining copper prices are a red flag for an ascending stock index. What does the curious chart of copper really tell us?

On the technical side, copper has a very bearish chart. My interpretation is that copper is in a bearish head-and-shoulders pattern and maybe worse, a very bearish descending triangle that infers that copper prices could decline another 50% or so from the present.

Fundamentally, copper gets even more curious.

First, many geologists think that copper discoveries peaked in 1996. That is, while production has indeed been rising every year, significant new discoveries have been non-existent. And yes, technology has allowed for mining to extract more copper from existent mines. But some of the biggest copper mines on the planet are almost exhausted. This should be driving copper prices higher but it is not.

Second, about 40% of the world’s copper is mined from Chile and Peru. Since the Spring of 2011, the US dollar has appreciated about 10% against a basket of other currencies. In the same time span, copper has fallen in price by about 10%. The dollar translation to the Chilean peso should make copper cheaper so the recent decline in copper prices seems plausible. Should the US dollar rise further, because of, say, Fed tapering, copper should continue to decline in price.

Confused? This is why copper is so curious. What then should we think of copper?

Fundamentally, copper is telling us that the economy is not really improving. While the central bankers have inflated financial assets with their perpetual quantitative easing policies, they have not inflated the real economy. Asia is the biggest consumer of copper as the manufacturing hub of almost all electronic equipment. Westerners buy lots of these electronic devices and unfortunately, many of them have lost jobs and relative affluence due to central banker policies and therefore no longer have the money to consume as many copper products. Central bankers have once again made the critical choice of stealing money from sovereign Treasuries and giving it to close bankster friends but none of that money has made it into the hands of consumers. Money velocity remains at an all-time low and that confirms this notion. So, it seems logical that copper would fall in price. Maybe the added production given tepid demand is pushing prices lower.

Technically, the chart makes copper a very curious chart. Clearly stock indices should not move higher without copper prices moving in tandem. Over the last few years, copper and stock indices have been generally moving in opposite directions. Now, either the Dow needs to pull back or copper needs to forge ahead. Which is more likely to happen?

Given the negative chart of copper, it would seem likely that copper will continue to decline in price. Given that the central bankers are more concerned about stealing all the money from all the Treasuries of the world through debt expansion, they will continue to use indexes like the Dow as part of their strategy of diversion. As long as the Dow keeps moving higher, no one will notice the pilfering on the part of the bankster cartel. Certainly this will keep the attention on the Dow and not on copper.

In summary, I would look for the trend to continue. The Dow will keep moving higher and copper will keep moving lower. At some point, the two lines on the chart will be too far apart and they will have to rejoin. It would seem more likely for the Dow to fall than for copper to rise. But not yet. Until that time, copper will just have to remain a curious side show to the central bankers’ destruction of capitalism. 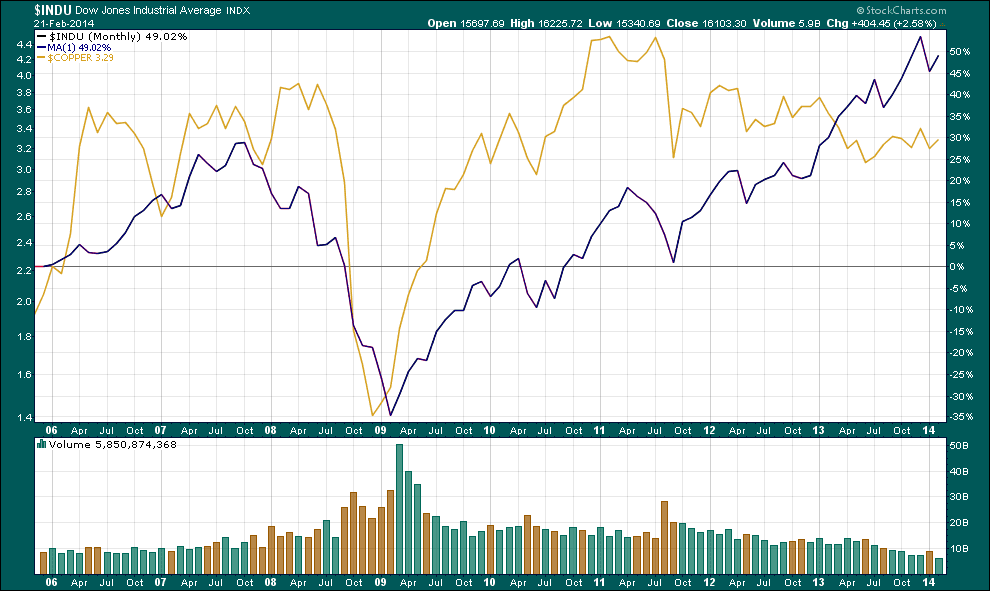 Disclaimer: The views discussed in this article are solely the opinion of the writer and have been presented for educational purposes. They are not meant to serve as individual investment advice and should not be taken as such. This is not a solicitation to buy or sell anything. Readers should consult their registered financial representative to determine the suitability of any investment strategies undertaken or implemented. BMF Investments, Inc. assumes no liability nor credit for any actions taken based on this article.