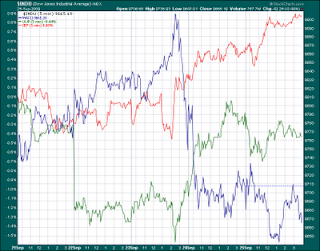 Recession Ends with a New Bubble in Place
The Dow will hit 11,428 by the end of 2009. How's that for a prediction? Well, it's not so much a prediction as much as a realization that that's where the Fed wants the Dow before year's end. Why? Below is a seven year chart of the Dow. It shows the second hump of the enormous double top suggesting a reading of zero for the Dow eventually. But for now, our bankers need to get their stock options back in the black so the PPT needs to run the markets a bit higher. Since fundamentals have long been deemed useless and unnecessary, we have to turn to technicals. Fibonacci retracement levels are Ben's target so they are now mine as well. Ben can't just buy the bank stocks or even the stupidest investor will catch on that the market rally isn't really about 'economic recovery' or 'market rallies' or any of that crap. It's all about bank domination and banks can't dominate until they have everything. They soon will including CEO options.
I take Dow 7000 as a low and assume that the 6500 mark was just a shameful low that Bernanke and company let slip through their manipulative hands. Long story short, a 50% retracement puts the Dow at about 10588. They should have that by mid-October. Now, remember, Dow 10800 was a tough level to penetrate on the first bubble the Fed blew in the markets but we finally blew it out to 14000. 11428 would the magic 62% retracement but more importantly, that level would break up the downtrend line. Even more importantly, the banking con men will all have their stock options back in the black. Who says, 'crime doesn't pay'? All they had to do was to get the Fed to give them their money back through stock manipulation and give their banks their money back through the Treasury stealing the money from the country. They didn't even have to use a gun. All they had to do was threaten stock holders with further losses. Stock holders have literally given up everything for the current rally. Anyway, look for the next jolt to push the Dow to the mid 10000 range and then the final push to over 11000 that will of course be based on some ridiculous lie conjured by government incapable of truth.
This past week enjoyed yet another week of market gains. As you can see from the chart below, the kitchen sink was thrown at the markets in March and April with the Fed taking center position in stock purchases. Just look at the volume. Who else had that kind of money to throw at a market plunging to zero pushed by a bankrupt financial sector? Every week since, every month since, has seen less and less volume. Worse, almost half of the daily trading volume of late has come from government owned and government bought and government manipulated stocks - Citigroup, Fannie and Freddie, and AIG. The bottom line is that the Fed has killed the sellers. Onward and outward with the next Fed bubble. When it pops, it will be and it will feel just like 2000 all over again. Ebulliency turns to depression in a nano second. We will likely experience an unabated 60% plunge from the popping point. What will instigate it? Perhaps truth and reality.
Heck, government has yet to impose the new government insurance tax. It is incredible that the new government led by some of the stupidest people that have ever walked the planet are so convinced that government can cure anything and that government needs to control everything but they don't see the need for government to control one thing. The currency. They leave that to the real power - the Federal Reserve. I would suggest, as many before me have, that if you don't control your currency, you don't control your destiny. Doesn't it seem incredible that the Fed head, Bernanke, declared the recession dead this past week yet hints that interest rates will remain at zero forever? Isn't it incredible that the recession has ended while members of dumb and dumber Congress are contemplating expanding house buying subsidies to as much as $15,000 per purchase? Are they purposely trying to spiral us into a depression by depressing asset values for everyone that played by the rules and saved and invested? Are they purposely trying to devalue the currency to a point of worthlessness?
Speaking of worthless currency, the stock market is obviously rising as the currency is falling. The bad news is the currency can only fall to zero and it is getting there fast. Gold and silver have awakened from their slumber and now look to be joining other metals in a race to the sky as currency alternatives. Again, if the dollar is worthless, it will be reflected in the interest coupons attached to currency debt. If you borrow the worthless dollar from the worthless Fed at zero percent, you can then sell it and buy another currency like the Aussie that pays an interest coupon. That's called a 'carry trade'. That's how you know that crap in your wallet is useless. It is merely a tool that is used to blow bubbles. All the stupid people like bubbles because they don't know they are bubbles. All the people looking to make a buck on the con job like bubbles because all you have to do is be on the right side of the con men blowing the bubbles. Blow on, Ben. Blow on... 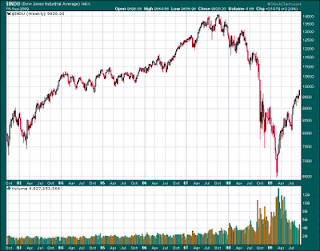 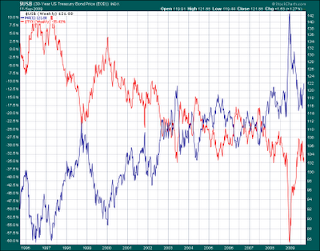 Soused
I was buying groceries the other day and I noticed the price of 'Souse' was $2.00 per pound. If you don't know, souse is a spam-like mixture of pig rinds and pig snouts. Yummy! Most people wouldn't touch this stuff but in hard times, we can't afford to waste anything. But $2.00 per pound? My mercy, is inflation a beast!! Yes, I know the liars that we elect to govern us claim that inflation does not exist but these are the same people that perpetuate the myth of a 'strong dollar' policy while they do everything in their incompetent power to destroy the buck's power every day. This results, of course, in inflation. Count it or not. Reinvent formulas to say there is none. Whatever. Our government is a lie. Everyday. All day. Lies, lies, and more lies. If there is no inflation, how in the world does a package of souse, at any weight, deserve a price of $2.00 per pound?
The reason for inflation and the denial of such inflation is simple. The economy is stuck in a rut and looks destined for a slow-bleed death. Our government could pull us out of the economic death spiral but that would require all of Congress, all of the House, and all of the White House to disband and go home for good never to bother us again. They are all incompetent idiots void of intellect or economic understanding. Our only chance is for them all to lose their path to the capital building and never return. Maybe they should all convene at Pelosi's wine ranch to contemplate the sequence - destruction of California, destruction of America, destruction of the entire Western Hemisphere, etc... Well, Pelosi can already click off the first two. There's a real 'jenuis' at work! The truth is, our government is trying to revive the economy with good old fashion inflation. The Fed is supplying the exorbitant supply of money and credit. Our elected officials have abandoned responsibility to their constituents by becoming a lap dog to every wish of the Federal Reserve. No one knows anything. The only strategy employed at the moment is to throw money at the problem. Number one, that won't help. Number two, it causes inflation. Number three, it is an exercise in stupidity. At best, all the extra money will only blow a stock market bubble even bigger. At worse, our money becomes worth less than the paper on which it is printed.
Isn't it curious that the dunderheads running the show are trying to expand debt when debt has already drowned the American public? Soon, half of all mortgages will be under water and the government thinks it is a good idea to boost home ownership through first time buyer credits. That will only accelerate the drowning. Of course, the government does have ownership in the lenders. Isn't it curious that the government instituted the 'cash for clunkers' program to spur auto sales at a time when auto loan delinquencies are rising. Of course, the government does have ownership in the car makers. Isn't it curious that the government has their talking puppets out touting economic recovery when unemployment is growing by the tens of thousands every week? Of course, government employees now make two or three times the salary of the luckily employed private sector populace. The elite have arrived. Now they need to placate the serfs. So they lie and cheer us on while we dig our debt graves deeper.
The chart below is a look at the Dow last week with 10-minute bars. You can see that the PPT kept the market higher to lock in the August gains that ended Monday. Tuesday was met with an immediate and harsh selloff. The PPT wrestled control of market direction from the sellers on Wednesday and then bolted the indexes higher on Thursday with classic PPT micro-thrusts of buying at the end of the day. Obviously wanting to get started on their Labor Day weekend a bit early, the PPT elected to pop the markets higher on Friday at 11 in the morning rather than wait till their prescribed 3 o'clock rally hour in the afternoon. Bravo! Well played, gents. But, next week is yet another week and the picture ain't getting any brighter. Each rally carries us higher and higher to bubblicious territory and the real news is really not good. The clunker stimulus is over. The housing stimulus soon will be as well. Souse is $2.00 per pound and climbing. The average American is losing their footing on the mountain of affluence.
My best advice is don't fight the PPT. They have the only legal right in the world to use counterfeit money. Hey, maybe that's what we should call the new market - a 'counterfeit market'! Enjoy! Just send me royalties on the copyright usage. Next stop - Dow 10,500. Why? Because the PPT wants us there! 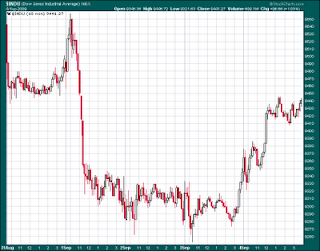