Planes, Trains, and Automobiles
Plane companies are fairing poorly right now. Boeing is delaying their new 747. Airlines are cutting back and some are announcing more layoffs. Train companies don't see signs of economic recovery as that include that tidbit in their earnings releases. Automobile companies? Well, you know their story. Ditto. Do you think the market cares? Nah. The stock market senses a rally but that's just because the stock market has had its senses beaten out over the past eight years. It has also been taken over by central bankers who have nothing to offer but money and market rallies. So, we have a rally. Is the central bank a genius for engineering a 'turn around'?
Hardly. The chart below is the DIA ETF and it shows the week's action. Friday was again interesting because Microsoft and Amazon announced poor earnings results and less than stellar guidance. UPS continued to see a weak economy and so did a few train companies. The market sagged on early Friday morning after an ugly futures market overnight. So what. We have the PPT and they were simply not going to let the market, or at least the Dow, fall back below 9000. Who needs earnings anyway. Besides, the PPT has to keep the rally going as we look forward to a record $115 billion in Treasury issuance this coming week. I've said a lot so let's break it down.
The Federal Reserve runs the market now and they don't need earnings and they don't need an economy. Both are just noise. All they need is money and they have a lot of it. To play the con game of 'economic recovery leading to market recovery', they need shills. Enter Goldman Sachs and JP Morgan. Since the Fed gave them their money back from all their real estate Ponzi scheme losses, they assist the Fed in buying up stocks. And, they all make a killing do so. Are they all geniuses? Again, hardly.
One only has to ask where the Fed gets all the money to buy half of the Treasury action while manipulating the markets. Again, notice the volume in the last 20 minutes of Friday afternoon. It picked up significantly and that is not 'normal' for a July Friday. Guess who was buying the rally? Okay, we know the Fed plays the ETFs. We also know they dominate the derivative market. They even admit this. Now, we also know that the preponderance of derivatives and swaps are interest rate oriented. Who knows more about interest rate direction than our very own Fed? How much of the coming $115 billion in Treasuries will they buy and what will be their timing? Insider trading is not genius. Criminal, maybe. But not genius. Of course, they likely call their buddies Goldman, JP, and BofA up beforehand so they can all get in on the action. Hence, all the great earnings reports from the Fed's right hand men. As in the case of BofA, they lost $2.5 billion in credit cards and lending. However, in 'global banking' and 'investment banking' their piles of profits grew to the clouds thus producing a smackdown second quarter that will no doubt result in big bonus checks for the swindlers. Isn't that nice. Two quarters ago they were all headed for bankruptcy. Turn back the hands of time, allow mark to fantasy accounting once again, liar loans, 125% financing through Fannie and Freddie, cook the books, steal from the tax payers, enlist of the help of the dumbest people ever to walk the planet Earth (Congress and the House of Reps - Pelosi, Reid, Dodd, Nit, and Wit), and engage in insider trading and frontrunning and presto! Back to record profitability and executive bonuses! Ain't Americans stupider than a bucket of retarded nails. Who says crime doesn't pay. Hey, enjoy the rally. The Fed sure is. Oh, by the way, the next target to bust up the downtrend on the Dow is 9600 and then 10500. What the heck. We may never even have another down day in the market!!!!!! Rock on, PPT. 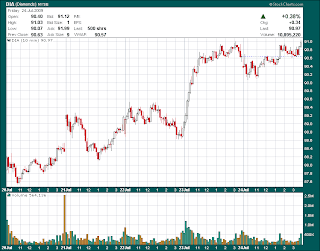 The PPT Never Sleeps
The stock market is pretty simple. Now that the central bank has taken over the government of the US, they have also taken command of the stock market. As the Dow and the other indices rolled over in early July, the PPT heard the cry of Dow 8200. The bearish head and shoulders was in place. As soon as 8200 was breached, the alarms went off and the PPT swung to action. Emboldened by the fantastic earnings of Goldman Sachs, the PPT helped boost the markets back up. I have to admit that when I heard the earnings of Goldman, I honestly felt like vomiting. I felt physically sick. Two quarters back they were losing money and searching for bankruptcy lawyers. Then Treasury Sec. Paulson ran the coup with the Fed and wrestled tax payer money from the US and gave it to Sachs. Presto. They report positive earnings again. Well, it's not so much that they reported positive earnings. The second quarter of 2009 was the best in the company's 140 year history. Are you kidding me? Have they any shame? They are simply rubbing our noses in the coup. I still have the taste of vomit in my mouth. So now we have a rally instigated by the thieves of the world. Woopi.
Friday, July 17, 2009, was an interesting day. The week's rally threatened to end on a down Friday. Well, not while the PPT was on duty. As you can see from the charts below, the indices came roaring back at the end of the day. And, I mean in the last 30 minutes of a July Friday afternoon. I thought traders went home early on Friday. I thought most real 'trading' wound down long before the Friday closing bell. Not this Friday. There was a strong rally with very strong volume. Gee, I wonder who was trading all that volume going into the final few minutes of the day? The PPT does not go home early. Why do I drag the PPT into the conversation, you may ask? The first chart is the S&P 500 and you can see that it finished slightly down after a strong final few minute updraft of desperate buying by somebody. However, I have always suspected that the PPT uses the futures market to manipulate the markets. Sure enough, the second chart shows that the S&P futures ETF, the SPY, actually made it into positive territory with the strongest volume of the day coming in the last 30 minutes of Friday afternoon trading. Shazaammm!!!! Is this the ultimate green light to put all of our money into the stock market and trust Ben Bernanke and the PPT to act as our trampoline? It would seem so. I'm going to go vomit now.
Chart courtesy StockCharts.com
SPX 1-day 5-minute bars 7/17/09 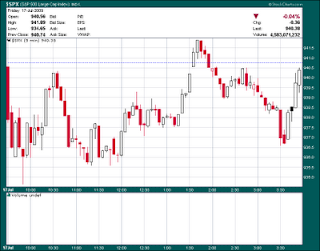 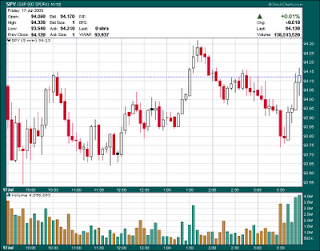 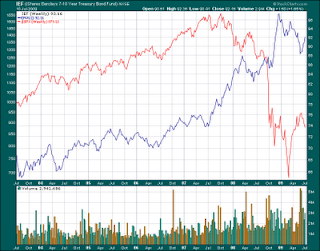 Are the 'Green Shoots' just spray painted by the Fed?

Well, the Dow fell a few hundred points this holiday shortened week to 8280. I have written endlessly and lectured endlessly about the 8200 level on the Dow. It is vital for the bulls to hold this ground. Bernanke is one of my most ardent followers as he has adhered to the interventionist strategy whenever we need a boost. I'm sure his alarm bells are ringing as I write. While we know he took the Thursday before the Independence holiday off (the Dow fell over 2%), he will be back at work on Monday.

In a nutshell, this is what we have left of a market. Trading volume going into the holiday is very light and the selling is not intense. There is no conviction. Traders are waiting for Bernanke to make his move. Traders are also worried that the 'green shoots' of economic recovery might just be spray painted by the Fed. Unemployment seems to be higher in every individual state that the reported national rate of 9.6%. We can assume that our pathologically lying government has under stated the actual number by quite a bit. The latest numbers were worse than expected even with an almost 200k addition by a wink of the eye and a flash of the magic wand known as the 'birth/death' ratio. So the market occasionally worries that recovery may not be as near as governmental liars and stock market cheerleaders suppose.