What Does The Stock Rally Tell Us?

This week was dominated with the scheduled speech on Friday from Fed Chairman Bernanke. He was supposed to give us all guidance on the prospects of more Fed stimulus. Surely we would be given a reason to buy or sell. Of course, the stock market don’t need no stinkin’ reason to do anything. It just does.
Notice the chart below. It is an intraday look at this past week. On Tuesday, the Dow rallied 300 points supposedly because traders were convinced a QE3 announcement was imminent. On Wednesday, gold dropped $100 dollars supposedly because traders were convinced that there would not be a QE3. Again, stocks rallied. On Friday, US Q2 GDP was revised down from 1.3% to 1%. Bernanke spoke. There was no mention of QE3. The Dow dropped 200 points. With a wink of an eye and a forefinger on the nose, the Dow proceeded to rise 400 points over the next few hours. It closed up 134 points with the help, as always , of a furious buying assault in the final minutes of trade.
What does the stock rally tell us? It tells us that we can rally because of QE3 anticipation. It can rally because there is a realization that there won’t be any QE3. It can rally because GDP was weak. It can rally because new jobless claims increased. It can rise because consumer confidence was the lowest since 1980. It can rise with new home starts the lowest on record. It can rise because Bernanke stimulates or doesn’t stimulate. It can rise because buying was greater than selling. It can rise because reality no longer matters. It can also rise because when there is no constructive use of money, it drifts towards speculation. Surely one day soon we will see a roulette wheel on the NYSE floor. Stocks could then be bought when the little ball lands on a black square and sold when the little ball lands on a red square. At least then, we would have a reason to buy or sell. 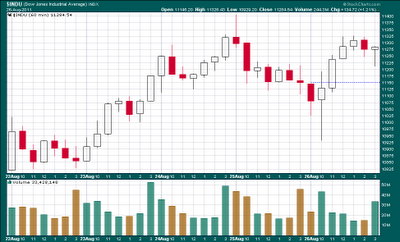 DJIA - 8/22/11 thru 8/26/11 intraday 60-minute bars
Chart courtesy StockCharts.com
Disclaimer: The views discussed in this article are solely the opinion of the writer and have been presented for educational purposes. They are not meant to serve as individual investment advice and should not be taken as such. This is not a solicitation to buy or sell anything. Readers should consult their registered financial representative to determine the suitability of any investment strategies undertaken or implemented. BMF Investments, Inc. assumes no liability nor credit for any actions taken based on this article. Advisory services offered through BMF Investments, Inc.