Investment bubbles are not hard to spot. There are times when insanity trumps everything and prices move higher and higher in spite of reality’s tethers. Bubbles float on insanity. Wild speculation. Irrational expectations. Hope.

This week that ended 11/20/15 is a good example of another such bubble.

Mass murderers struck Paris and Mali. More retailers reported slower to no growth. The Fed issued more warnings of a December rate increase. Japan lapsed into another recession. Europe is so slow ECB chief Draghi continued his rhetoric of doing anything and everything to save European stocks. Uh, I mean the European economy. And yet, the Dow gained over 3.5% on the weak. What gives?

The explanation from the carnival pundits was that the US was a ‘safe haven’ for investors who were fearful and had no where else to put their money. Really? Well I’m going to have to call ‘bulls#%t on that one. The chart below is the emerging markets ETF, the EEM. Emerging markets were actually up on this Friday (11/20/15) almost twice as much as the Dow. The pundits are all idiots. Case closed. See the chart. 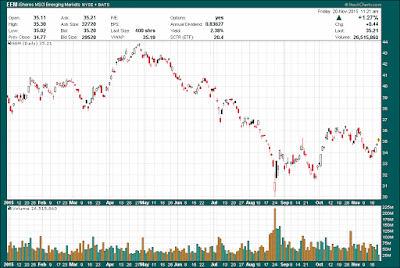 What could be another rally excuse? Oh yeah, corporate earnings are beating ‘analysts’ expectations. Well, ‘analysts’ are more akin to fortune tellers in their prognosticating prowess but that’s another story. The analysts are simply Wall Street shills whose function is to generate ‘buying’ opportunities. They do so by lowering expectations so that bloated companies can simple roll over the bar rather than jumping it. A case in point is the clothing retailer Abercrombie and Fitch.

The company reported their most recent quarter as such. Check out this quote from the Business News: “Abercrombie's sales have fallen for 11 quarters in a row, but the decline has slowed in the past two quarters, signs that business is improving after the company revamped merchandise, improved customers' in-store experience and shuffled management.” That’s right. The writer wants us to believe that business is improving after 11 straight quarterly declines in sales. Business is improving because, according to the writer, sales are not declining as fast as they were. Further, a company executive said that the company remains ‘cautious’ going forward and they expect the holiday sales quarter to be flat compared to last year.

To be fair, Abercrombie did say that income more than doubled due to cost cutting. Cost cutting can only juice earnings for so long. And, as comparison on this day, fellow retailer The Gap reported a 2% decline in sales and yet the stock price was up over 7.5%. However, Abercrombie was the clear winner. What does 11 straight quarters of declining sales and a tepid holiday quarter prediction get you in a bubble? Of course! The stock price is up over 25%  today as I write. See the chart below. 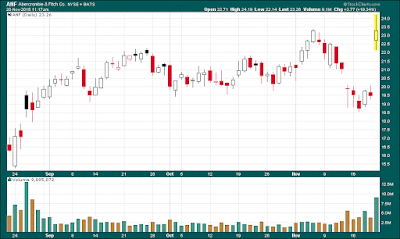 Bubbles are like this. Isaac Newton described the bubble of his era as ‘the madness of men’. True, but what is behind such insanity?

The Federal Reserve Bank comes to mind. The members have all echoed the same warning. They are going to raise interest rates at their next meeting in December, 2015.  Since their only function is to support Wall Street while they steal all the assets from the feckless US government and her profoundly and profanely ignorant citizens, it seems to me that FRB is goosing the stock indices higher to give themselves a little downside cushion should a selloff great their action. How else could one explain the best weekly stock gain all year for the major indices?

Disclaimer: The views discussed in this article are solely the opinion of the writer and have been presented for educational purposes. They are not meant to serve as individual investment advice and should not be taken as such. This is not a solicitation to buy or sell anything. Readers should consult their registered financial representative to determine the suitability of any investment strategies undertaken or implemented. BMF Investments, Inc. assumes no liability nor credit for any actions taken based on this article.
Posted by Truth at 4:47 PM No comments: